These are a close relative to the bonang, but larger in size. In traditional music, they form a link between the gongs and the rest of the ensemble. The kenong is a set of 6 gongs that resemble the bonang, but in a single row put up in a half circle, with an extra set of two small gongs (called ketuk and kempyang) placed aside, traditionally for further dividing and defining the cyclic gong structure.

We usually use just the kenong set, which comprises one octave, from low 2 to high 2. The pitch and sound of the kempyang is similar to one of the bonang kettles. 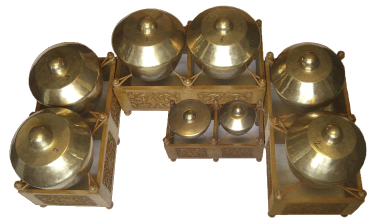 They are played with sticks like those used in playing the bonang, but considerably larger, and thus heavier.
Since the individual gongs have a size of about a 1/4 cubic meter each, and the bosses are some 70 cm apart from each other, it followes that speedy playing is not the first property of the kenong. Also the weight of the sticks does restrict fast playing.

Muting is done in the same way as in bonang playing, but one should keep in mind that kenongs can never be completely silenced – there will always be some rest noise.
In ketuk playing, one can utilize a special form of kecekan, in which one hand uses the stick, and the other hand is used for muting, by placing the flat hand on the surface of the ketuk. By alternating both hands, one can create interesting rhythmical patterns.